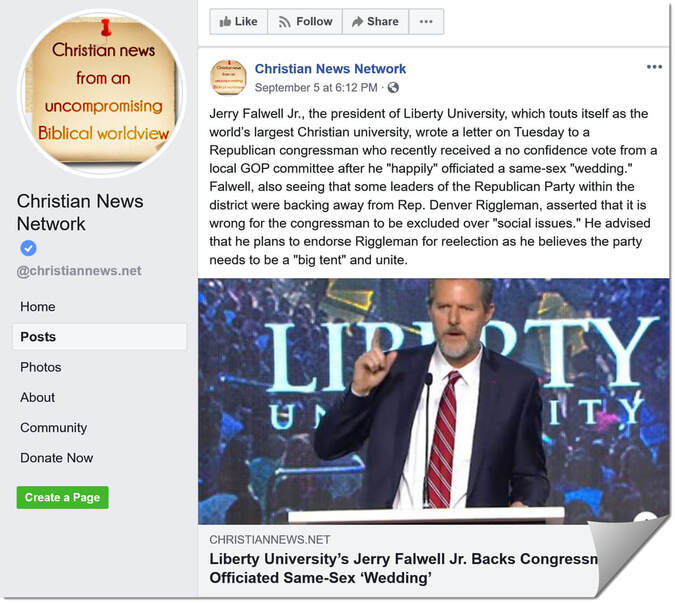 ​Jerry Falwell Jr.'s recent endorsement of Representative Denver Riggleman is in the news. It begs our thoughtful consideration of the twisted, tangled, line of demarcation between evangelicalism and politics. Dr. Falwell is deeply committed to both. We are not faulting Dr. Falwell’s character or motives or desire to serve his God and his nation - nor are we declaring his innocence.
​
What Dr. Falwell Did.
Dr. Falwell recently endorsed Republican Denver Riggleman in his Senate bid in spite of his no confidence vote from the local GOP after he “happily” officiated at a same sex wedding.

Why This Issue Is Significant.

1. It speaks to the dilemma evangelicals will continue to face as they seek to maintain a political presence in a pluralistic nation that is fast departing from God. Tens of thousands of evangelicals and fundamentalists rallied behind Donald Trump, for example, often arguing that in spite of their reservations he was the best moral and political choice for the nation. We get that. We understand when men, such as Falwell try to maintain a strong evangelical voice in these perverse days. Such men often find themselves in a no-win scenario - as in this case.
​
2. Additionally, this issue highlights the much larger contest between biblical Christianity and American pluralism. See the linked video on our site. Bible believers, who often taut pluralism as a God ordained system, must be admonished to return to their first principles. Simply stated, pluralism is not biblical, it is ecumenical. A true Bible believer cannot be a pluralist, though he certainly must submit to Caesar. So, in this post, we’ll set the pluralism discussion to one side.

Where and Why Dr. Falwell Did Wrong.

Dr. Falwell crossed a critical line in his defense of Representative Riggleman. In Falwell’s words, it is wrong for a congressman to be excluded over “social issues.”  The simple act of repeating that statement out loud a few times should be sufficient for most believers to cry foul, but not any more!  First, this is a moral issue being fought in a social context. All social issues are moral issues and all moral issues are biblical issues. Notice how mirror opposite this is to Falwell’s father who spoke out for the moral majority so called. Most significantly, Falwell’s position is in direct contradiction to the Word of God which admonishes us to reprove, rebuke, and warn, wherever we are, regardless of the arena, inside ( 2 Timothy 4:2) or outside (Mark 6:18) of the evangelical context.
​
Don’t fall into the pragmatic trap. Keep in mind that the issue is not “Which candidate is the most moral?’ - though that is a worthy discussion.  What matters is that Falwell has reduced a biblical issue to a social issue, that of a congressman using his congressional authority to approve and execute an immoral act, and doing so happily. By re-labeling this as a social issue and dragging it under the “big tent,” Falwell has declared it off limits. Our support of Riggleman is now seen as a testimony to our unity and our diversity. Morality has been sublimated to the higher cause. In reality, evangelicals who commend and approve such men and their actions are cart blanc are partakers of their sins (2 John 1:11).

How Falwell’s Stand Aids the Cause of Ecumenism.

1. Relativism embeds the lie into truth. We live in a culture which has turned its back on the knowledge of God (Romans 1:28). God is a God of absolute right and wrong. When we embed a little lie into the truth we corrupt the whole meal. What was the lie?  By implication, same-sex marriage is merely a social issue. Ecumenism thrives on marginalized absolutes.

2. Pragmatism confuses the truth with the lie. When we redefine or relabel issues for the sake of an immediate political gain there is always a larger price to pay in the end. It is never right to do wrong in order to do right (Romans 3:7,8). A recent poll showed that a majority of Americans see evangelicalism as simply another political faction.

3. Favoritism diminishes the importance of truth. Selective silence for the sake of righteous gain is unrighteous, nevertheless. When we tacitly approve one man’s immoral action without calling it out we lose our own credibility, and ecumenism wins because the salt has lost its savor and society now functions on fluid rather than absolute dynamics.

Dr. Falwell’s action has moved the discussion from absolutes to relatives and to contextualized morality. He has grayed the line between right and wrong and diminished the voice of tens of thousands of godly evangelicals and fundamentalists who beg to differ

​- End..
Scriptures cited.
​
​Preach the word; be instant in season, out of season; reprove, rebuke, exhort with all longsuffering and doctrine.
2 Timothy 4:2

If there come any unto you, and bring not this doctrine, receive him not into your house, neither bid him God speed: 11  For he that biddeth him God speed is partaker of his evil deeds.
2 John 1:11

For John had said unto Herod, It is not lawful for thee to have thy brother’s wife.
Mark 6:18

For if the truth of God hath more abounded through my lie unto his glory; why yet am I also judged as a sinner? And not rather, (as we be slanderously reported, and as some affirm that we say,) Let us do evil, that good may come? whose damnation is just.
Romans 3:7,8